Caster clerics don’t have a lot of spare feats. For a cleric with 35 cleric levels, after all necessary feats are taken, you will end up with one pre-epic feat before 20 to take. If you took human, this you will get another pre-epic feat. If you take 38 cleric levels, you get an extra epic feat. This is not a lot. You can deviate from these guidelines, of course. However, these feat recommendations are based on what will make the most powerful caster cleric.

The following feats I consider necessary for a good caster cleric:

Extend Spell is a feat that allows you to cast a spell with double the duration at one higher spell level. The most important spell this is used for is Divine Favour, which greatly helps your melee attacks.

Silent Spell is a feat that allows you to cast any one spell silently at one spell level higher. The silent casting is not much of a bonus, but it does let you take Harm in level 7 as well as level 6, which is a huge benefit.

Empower Spell increases the power of spells with die rolls by 50% by taking the spell two spell levels higher. This is used for both buffing spells, like Bull’s Strength, and for damage spells, like Blade Barrier. At high levels, its most important use is to give you a decent attack spell in level 8, by empowering Blade Barrier.

This feat does not do much apart from being a pre-requisite for the epic feat Improved Combat Casting.

These two feats increase the difficulty check (“DC”) of one of your most powerful spells – Storm of Vengeance. Storm of Vengeance works by dealing 3D6 acid damage a round. If enemies then fail a reflex save, they take a further 3D6 lightning damage which also stuns them if they lack mind spell immunity. Without a high DC, Storm of Vengeance is a short duration Acid Fog. With a high DC, it is one of the best crowd control spells in the game. As the power of this spell more than doubles if enemies fail their saving throw, this makes the Spell Focus feats must-haves.

Spell Focus Conjuration is also used for doing damage to undead with Heal and Mass Heal.

After taking the required pre-epic feats, you have one more feat choice, and two more if your race is human. The following feats are worth taking:

Very good for levelling up, but loses some of its power at 40. Mostly used for taking Blade Barrier in level 9, but this is only useful in certain situations as Storm of Vengeance and Mass Harm are better level 9 choices.

These two feats give you an extra + 5 or +10 to armour class if holding a melee weapon. Unfortunately, you cannot cast within Expertise, which would have made these feats a must have. They still have some benefits though if you have cast all your area attack spells and need to sit around and increase your armour class while your spells kill things. These feats need 13 intelligence to take.

Caster clerics attack with three spell schools – conjuration, evocation and necromancy. Since conjuration is the most necessary to have a high DC for, usually I recommend just taking feats for conjuration and then using spell focus runes for the other two schools. However, if you have a build with 38 cleric levels, you can afford to take another feated school focus. Taking 38 cleric levels will give you an extra epic feat, so you can spend this on, for example, Epic Spell Focus Necromancy after also taking the pre-requisites before level 20. This is one of the better arguments for a 38 cleric build.

Disciple of Sun adds a damage effect to you turn undead and this is strengthened by the Sun domain. This is a useful feat, but not my top choice as caster clerics already have an array of strong undead fighting spells.

Divine Resistance adds an elemental immunity of 25% to your party members. This can be useful, but it does not really translate to a large damage reduction in game unless fighting elementals.

Toughness gives you 40 more hitpoints by level 40. It is good, but I do feel there are better feats to take.

After level 20, you do not have much of a feat choice due to the high wisdom requirement. If you take 35 cleric levels, you won’t get any choices aside from what I see as the most powerful epic feats. These feats are:

Taking each of these feats requires 12 feat choices after 20, which can only be achieved using bonus cleric feats from at least 35 cleric levels.

This is a line of 10 feats ranging from Great wisdom 1 to Great Wisdom 10. Each feat increases your wisdom score by 1. Taking Great wisdom 10 is necessary to get the maximum amount of wisdom for high spell DC and high numbers of spells per day.

This feat allows you to cast without incurring attacks of opportunity. This is very useful, as you will often be casting in the middle of large groups of enemies. Without this feat, a single cast may get you killed.

Taking epic spell conjuration lifts the DC of your Storm of Vengeance to very high levels. It also serves as a prerequisite for Mythic Spell Focus.

You will only have an extra epic feat available if you took 38 cleric levels. There are a few choices here.

If you took a second line of spell focus feats before 20, you could also take a second Epic Spell Focus feats to lift your other attack spells up to having very high DC. This is probably the best choice of discretionary epic feat for a 38 cleric build.

This is a ranged heal. However, the availability of Genesis for all clerics makes this a little unattractive.

Two more AC. However, in itself this is not terribly useful, since caster clerics depend more on crowd control and healing to defend themselves.

This could be useful for extra skill in open locks, hide or healing. 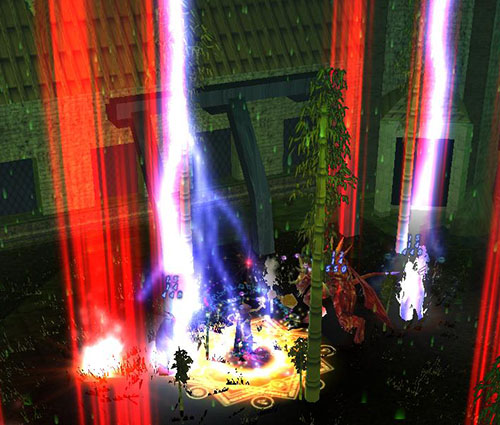 Mythic feats are still very new, however there are a number of standout feats. Caster clerics can get three benefits from mythic feats – defence, attack power and range.

You should note, however, that at this stage, there is a bug which only allows the use of 7 activated abilities in the cleric radial menu. Since all powers like Turn Undead, horse riding, domain powers etc fit into the radial menu, this restricts the number of activated mythic abilities which can be taken. Caster clerics are not terribly affected by the bug, since they won't have Divine Might and Divine Shield to take up room, but you will need to plan your abilities around this bug. Taking passive abilities like Master of Dark will not be affected by this problem.

Some of the better ones are:

The best caster cleric mythic feat, this gives immunity to critical hits. This reduces incoming damage significantly, and is good for both soloing and supporting a party, as if you die you cannot support anyone from Fugue.

Makes your negative energy spells do 20% more damage. The main caster cleric attack is with Harm and Mass Harm, which makes Master of Dark one of the better attack feats.

Probably not as good for caster clerics as Immortality due to its limited duration, but it is one of the strongest defensive feats available to you as it will reduce incoming damage by 90%.

This spell gives you added range by giving you a strong Mass Harm type spell that can be placed anywhere without a touch attack. Although Mass Harm can do similar damage at close range, Omega gives you a ranged attack which you will not otherwise have. Having something roughly equivalent to a few extra level 9 spells is also good, since number of level 9 spell slots is the most important consideration for a caster cleric. Omega will also have a higher DC than Mass Harm. Another benefit of Omega that it is classed as a mythic spell, not a necromancy spell. Therefore, it will bypass necromancy spell immunity.

The opposite of Omega, this is a large, ranged Mass Heal. It is also useful for pre-healing a group, as will grant temporary hitpoints equal to a character’s current health if cast on an uninjured character.

This will further increase your spell DC. It requires an Epic Spell Focus feat, which you should have.

This spell gives a strong damage shield, as well as instantly resurrecting anyone killed while protected by it. It needs the Healing or Fire domain to be taken.

A very strong party buff that reduces all physical damage by 50% and grants immunity to knockdown. Requires the Earth domain.

A very decent party buff that gives each character an extra attack a round. Requires the War domain.

Back to Caster Clerics.

Community content is available under CC-BY-SA unless otherwise noted.
Advertisement