What is a caster cleric? 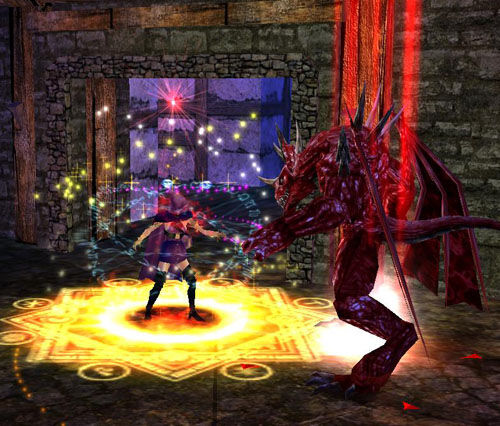 A caster cleric is a cleric character who uses spells as their main attack. As with other clerics, they can use weapons, and these can be quite effective. However, they mostly rely on spells.

Roles of a caster cleric[]

One of the main differences between a caster cleric and a mage is that the cleric will have more powerful offensive spells, but they will have much less range. Their main attacks will require the cleric to be in melee range or close to it.

A caster cleric has an almost unlimited supply of healing. They have many healing spells, and with high wisdom can make good use of healing kits and salves.

A caster cleric has access to three of the most effective crowd control spells in the game – Storm of Vengeance, Word of Faith and Darkness. They may also have access to Creeping Doom, and will be able to use Hammer of the Gods at lower levels. They will not have a lot of focused crowd control on one target like a mage, but the area spells can stun or blind anyone who walks into their range.

Caster clerics have a few party buffs. Not enough to drastically improve a party, but they are worth casting.

With a few buffing spells and the right feats, caster clerics can use a melee or ranged weapon decently. Not enough to match a dedicated archer or melee fighter, but enough to fill in a gap when you don’t have a suitable spell.

Not quite the best role for a caster cleric, but with the right feats they can take a lot of damage to take down.

Caster clerics work best in party situations where the party is fighting a large number of enemies. With the notable exception of Harm (and no cleric wants to cast Harm over and over), almost all of a caster cleric’s spells are area of effect. This means that a usual tactical approach involves melee fighters engaging as many opponents as possible, while the cleric uses their area of effect attacks to kill things, while at the same time using crowd control and area healing to help shrug off the large amounts of damage the party may otherwise take.

On the other hand, caster clerics do not function well in parties using standard pulling tactics – that is, edging to the outside of enemy range, attracting one or two opponents, dealing with them, and then repeating. This approach will tend to waste half the cleric’s spell book which is focused on engaging multiple enemies.

What this means is that to get the most out of a caster cleric in a party situation there needs to be a common understanding of tactics based on knowledge of the cleric's spell abilities. It is possibly for a caster cleric to function admirably in a fairly tactics-less situation where everyone just charges in, as the cleric can just do their own thing to attack and engage everything the party is engaging. However, in this situation it is very difficult for the cleric to help the party if things go wrong, since everyone will be too spread out to be healed.

On the other hand, a party pulling one or two enemies at a time does not use the cleric to their full potential – they’re not giving the cleric an opportunity to use most of their spellbook, which can be frustrating being limited to your level 6 single target spells.

The optimal party formation is based on the nature of the clerical spells being circles of various sizes. If the cleric is in the centre of a box or circle formation, they can cover each party member with both offensive and healing spells. 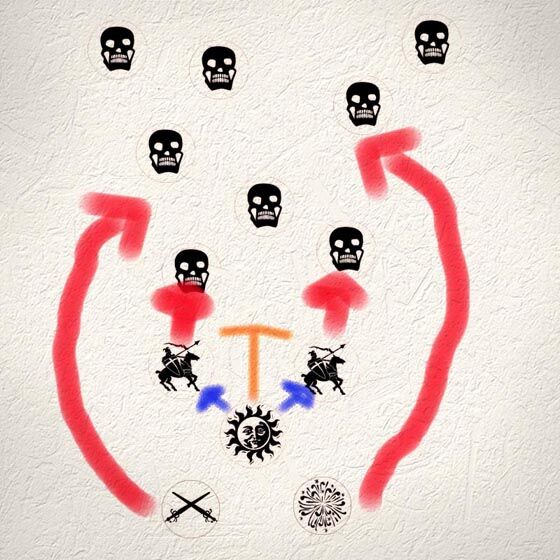 The melee should engage as many opponents as possible, with others slightly behind. Flanked by the two melee, the cleric will be able to keep them alive against anything short of a devastating critical hit. In turn, the melee will keep the cleric alive. The cleric will also use their powerful short ranged attack spells like Mass Harm to attack everything close to the melee.

While this is going on, the cleric’s area of effect crowd control around the formation will allow other mages and rogues to attack however they like without fear of retaliation. This is a classic hammer and anvil formation and a party that correctly pulls it off is almost invincible.

To respond to archery, the rogues and mages can shoot back, while the cleric and melee advance. The cleric's mass heals make the melee almost impervious to missiles, save for devastating critical. There are ways for the cleric to protect melee against even this, however (using the Phoenix spell is one).

This makes the optimal party makeup for a caster cleric as two frontline melee fighters, one caster cleric, and one or two mages or rogues. Anything more than that and it tends to break the formations a cleric works best with. Large characters like dragon shifters also tend to break formation tactics.

The abilities of a caster cleric do not change when playing solo, however their strengths create an interesting situation. Because the cleric is geared towards fighting groups of enemies, they need to find a way to do this without getting killed. This means that knowing how to use crowd control spells is extremely important when playing alone. A typical sequence of attack is to lock down an area with a crowd control spell, then kill each enemy with spells and possibly supporting melee or ranged attacks.

What is not a Caster Cleric?[]

A mystic thurge is a prestige class which fits into the ‘divine caster’ bracket, but is not quite a caster cleric. Usually, a mystic thurge won’t have a very high wisdom score. Therefore, they will not be able to use to great effect many of the caster cleric spells like Storm of Vengeance which rely on having high wisdom to take the greatest effect.

A mystic thurge will also have reduced multiclassing options, and will not have access to many of the very strong mythic cleric caster feats. They make up for this by having an arcane spell book, but they don’t perform any of the caster cleric roles as good as a dedicated cleric. They also will not be able to melee like a caster cleric can, as the arcane caster levels reduces base attack bonus and prevents multiclassing into monk.

Back to Caster Clerics.

Community content is available under CC-BY-SA unless otherwise noted.
Advertisement